Aboard an LTU Airbus 330-200, high above the atmosphere in the polar north

For this eclipse, I was in starbord row 49 (and 50) of a chartered LTU airlines Airbus 330-200, which took off from Düsseldorf, Germany on eclipse morning, and intercepted the shadow at 35,000 feet as it raced across the Arctic Ocean. With the poor weather prospects on the ground in Siberia, the logistics difficulties of the Mongolian desert, and the chance to hook up with a very select group of the most cool eclipse chasers extant, this was a deal I couldn't very well pass up.

(Of course, as it turned out, most everybody on the ground in Siberia, Mongolia and China who chased this eclipse got to see it! A fabulous record!) 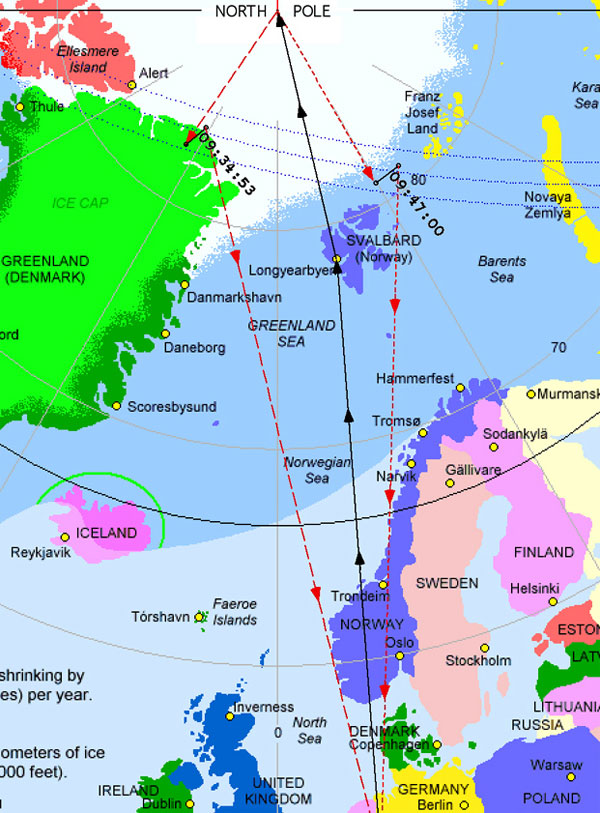 The map above represented our plans as they were laid out initially. The actual intercept of the shadow was carried out in real time from the cockpit of our LTU Airbus A330 by Dr. Glenn Schneider of the University of Arizona, and we took a flight path appx. halfway between those depicted above (but oriented in the same general direction). The eclipse run was set to place mid-eclipse (for us) at 09:43:00 UT, which was hit by our crack pilots right on the button. We experienced (by my calculation from the video captured by Jay Friedland) 2m 49s of totality!

After totality, we headed up to fly around the North Pole and flightsee over the spectacular Arctic scenry. Many of the folks on this flight were also aboard the Qantas charter that did pretty much the same eclipse-chasing thing in 2003 over the Antarctic. I was not aboard that flight, though I should have been (and I had a very compelling reason at the time...). I can unfortunately therefore NOT count myself among the ranks of the privileged few who can now proudly proclaim their official "bi-polar" status.

I had one still camera staged on each side of the plane with ultra-wide angle lenses, capturing a frame or two every second as the plane moved through the shadow. These images have been stacked into a video which you can see a low-rez version of by searching "LTU1111 eclipse" on YouTube.  (Here is the anti-sun direct video link, and here is the sun side.)  This same trick was performed on the 2003 flight by Jay Friedland, with some very good success. He also did the same kind of thing on this flight along with me, and we think that our combined efforts produced something very marvelous.

For those interested, here are the exact points and times of our eclipse intercepts:

Oh yes, and for the record, Svalbard is absolutely magnificent from the air. Pics will be up as soon as I can get to the chore of posting them!

Here are a couple of pics that will be of interest: 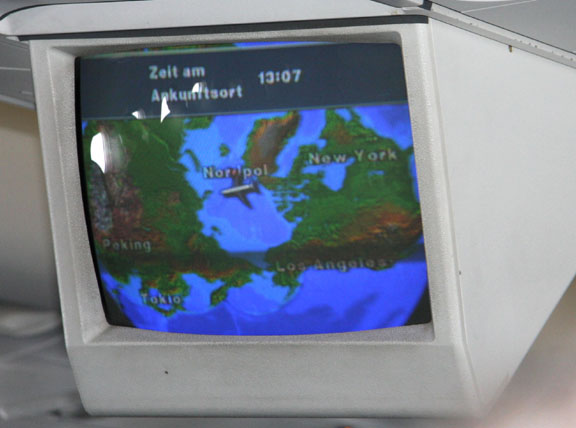 Our monitor on board the plane - how often do you see the plane icon centered directly above the North Pole?! 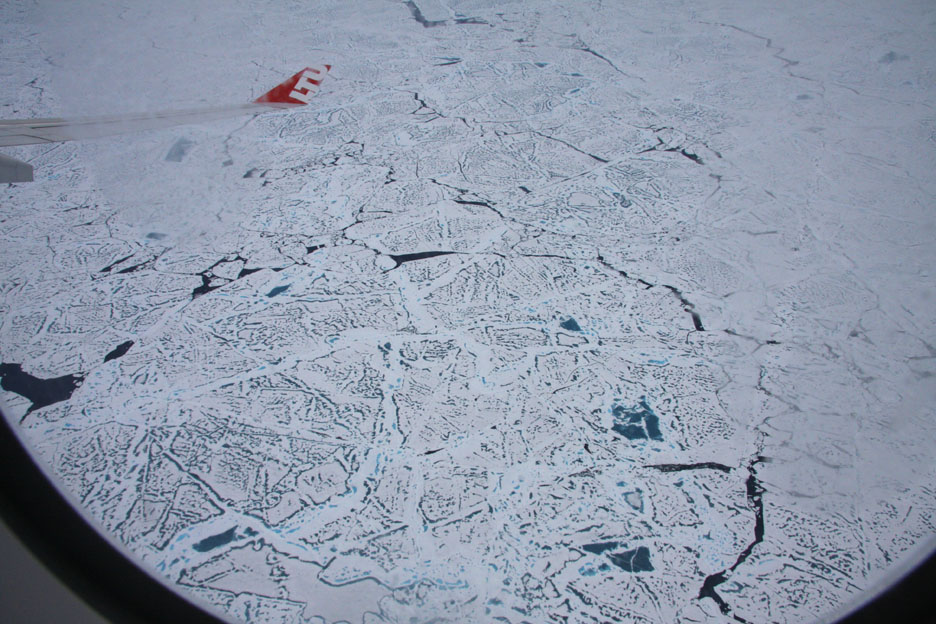 And here it is - the North Pole of the earth! Note the fractured ice, and the water clearly visible in the cracks
in the ice, and directly beneath it.  Granted, this is the middle of summer, but it IS the North Pole - which by all rights should
be completely frozen.  The viewer is invited to draw his/her own conclusion.

Here is some artistic license taken, where a photo of the diamond ring has been composed with the view from my automated camera out the port side of the aircraft during totality.  The moon's shadow is plainly visible in the sky, and on the ice of the Arctic ocean, and you can almost feel the three-dimensional geometry of the shadow cone as it sweeps over the earth.  (The shadow is moving from left to right, and is about to engulf the plane in this view.)

And finally, back in Düsseldorf after our 12-hour flight!  Most of the group is here, and I am the sunglassed person at the extreme far left (looking at the wrong camera, of course!)